Technology
Centra for e-commerce. Sanity for content. Adyen for payments. Gatsby for server less rendering. React frontend. Netlify and our very own Iterapp for hosting.
‍

Northern Playground was founded in 2014, and is run by Jo, Camilla, Anine and Marita right down the street from our offices. Their vision is to reduce the world's clothing production and consumption. They know that producing clothes in a ‘sustainable way’ only reduces the products emission by ~10%, and that the closest thing to sustainability is owning fewer and better garments. That's why we helped develop a digital interface and business model to change the textile industry. 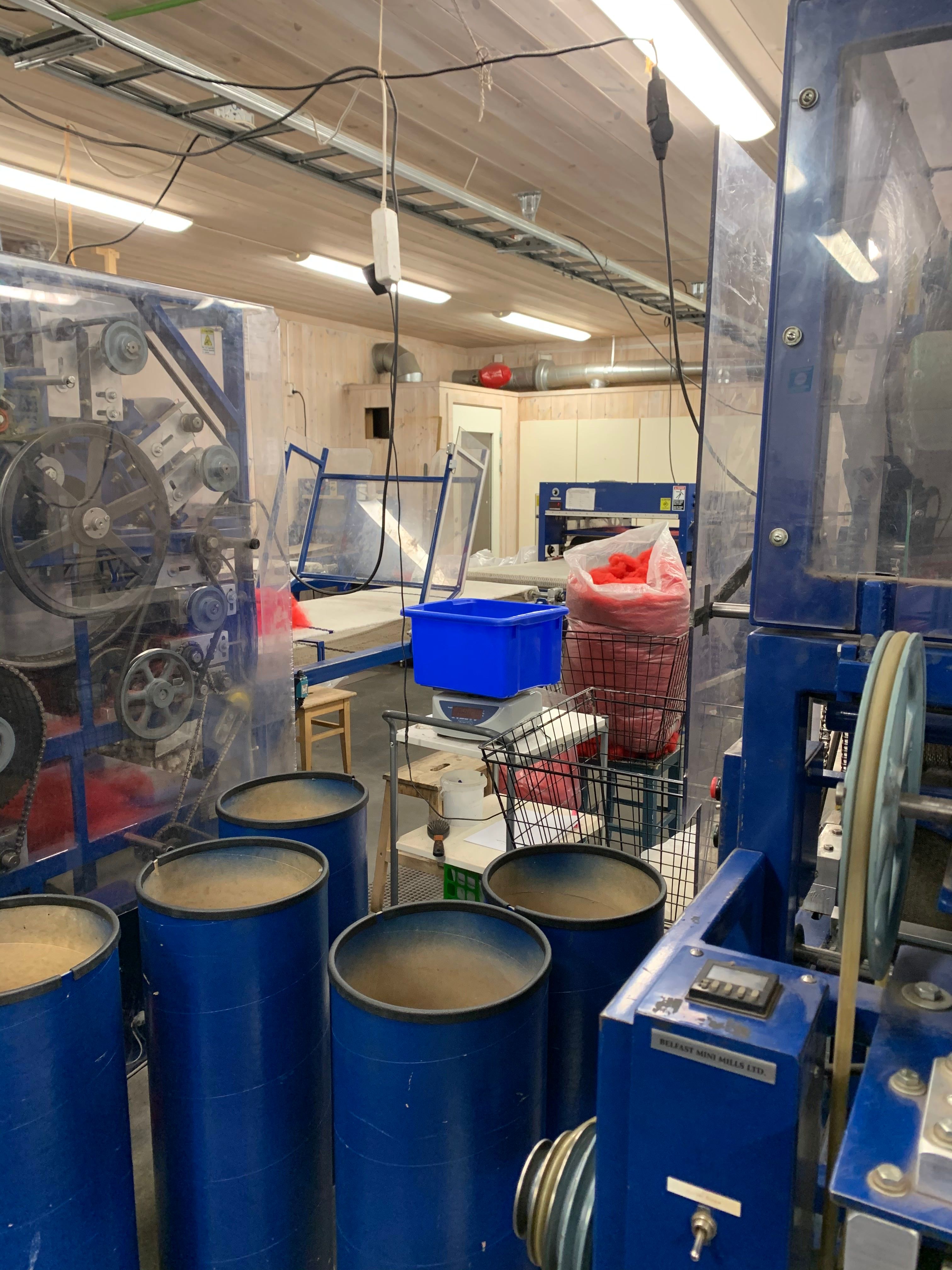 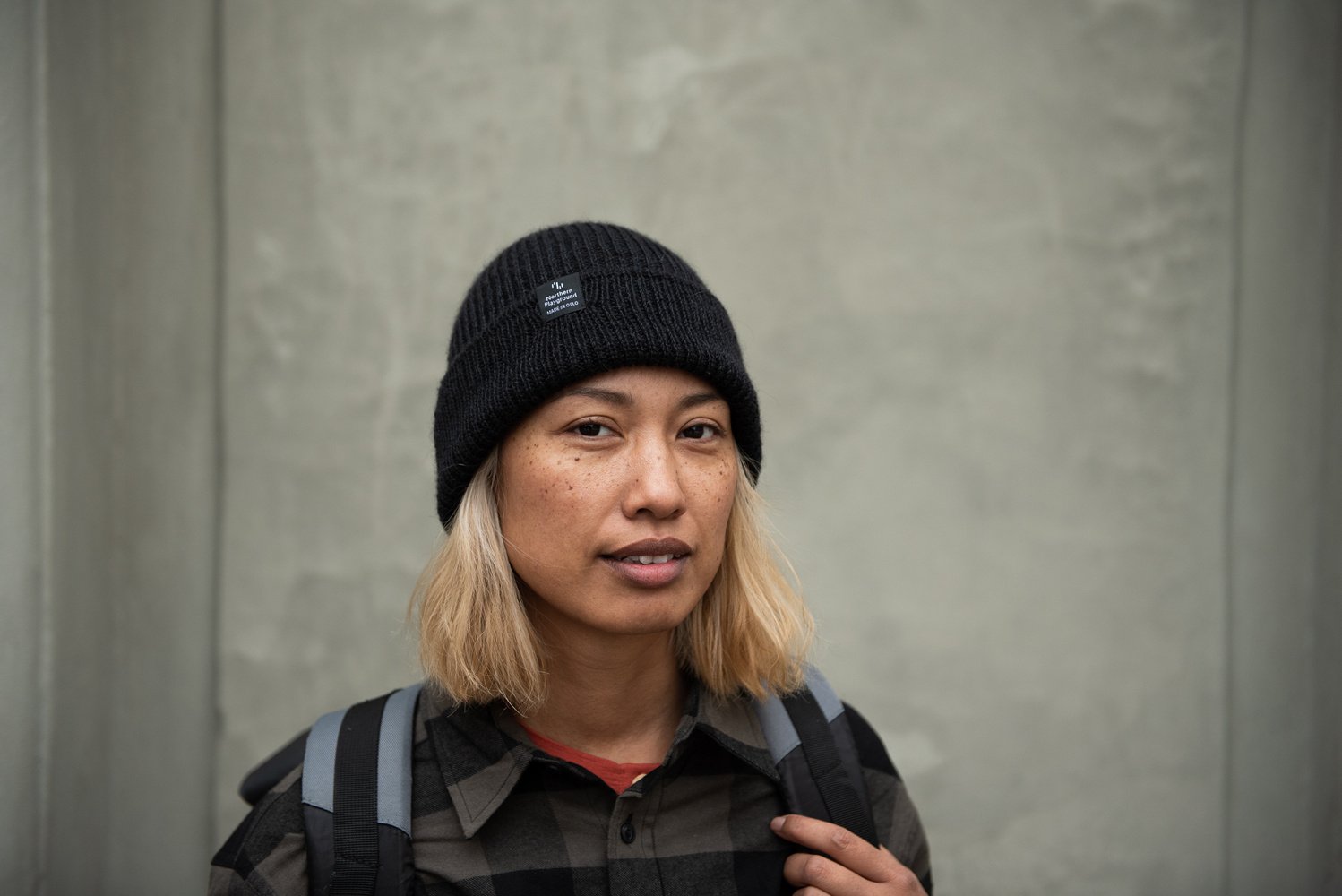 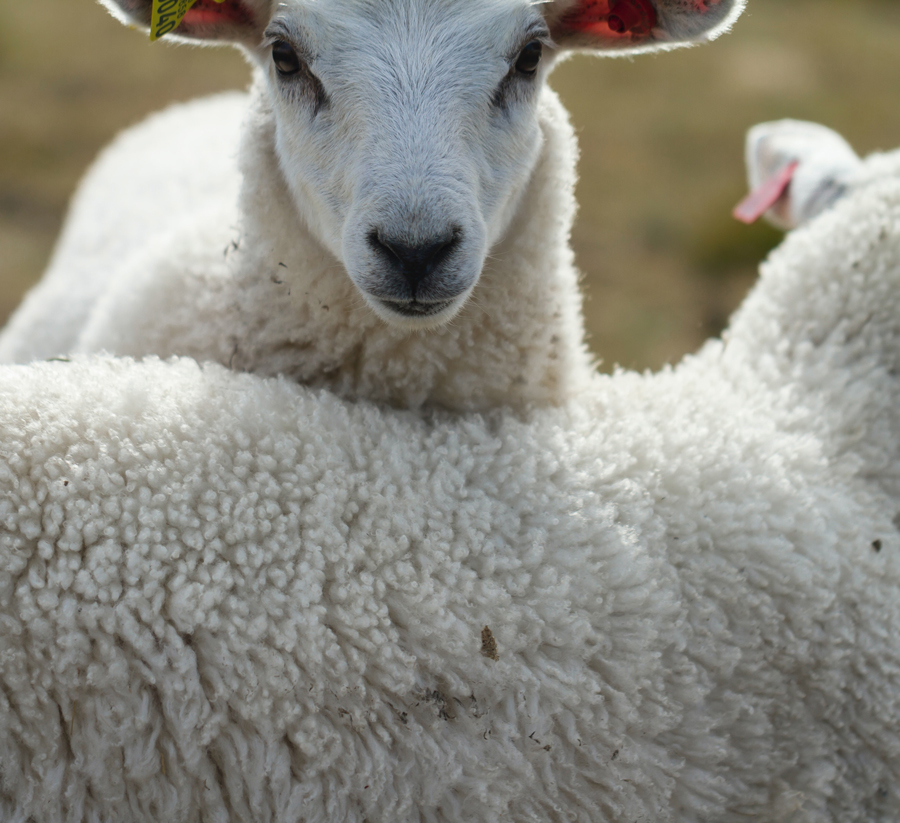 We first got to know Northern Playground back in January 2020 when we challenged their brief to stabilise their Woo-commerce site. After building both Dagens and Woolit, we were confident that a headless e-commerce platform and CMS, together with a react frontend, would be the best fit for a business with their ambitions. Northern Playground agreed and we used two months to completely transform their rigid system over to a flexible, tested, and scalable shop. By using Centra for e-commerce, Sanity for content, and Gatsby for serverless rendering, we created a fast and secure website with a great SEO. This transformation resulted in a 300% increase in sales and gave Northern Playground the confidence to change their model from B2B to D2C.

After the successful rebuild, Northern Playground was ready to take the next step in changing the industry. We wrote an application together, and were granted funds from Innovation Norway to develop the D2C model of the future. The model integrates customers in both the design- and decision phase of all products. By basing production on known facts rather than assumptions, Northern Playground aimed to defeat the biggest environmental crook of the manufacturing process – overproduction. In order to do so we had to change the digital interface from a traditional web store, to a community with a web store. A small team of two designers and developers packed their stuff and moved down the street – ready to pursue the vision of selling more and less products. 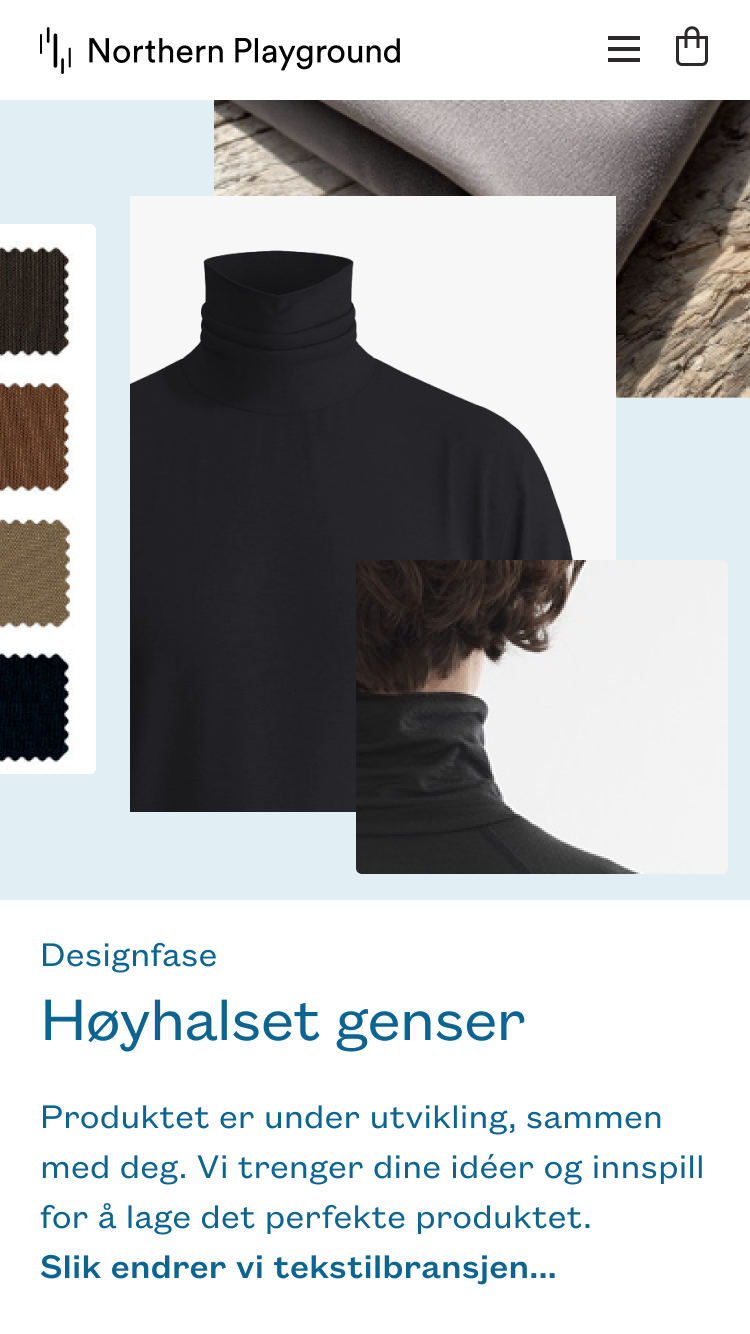 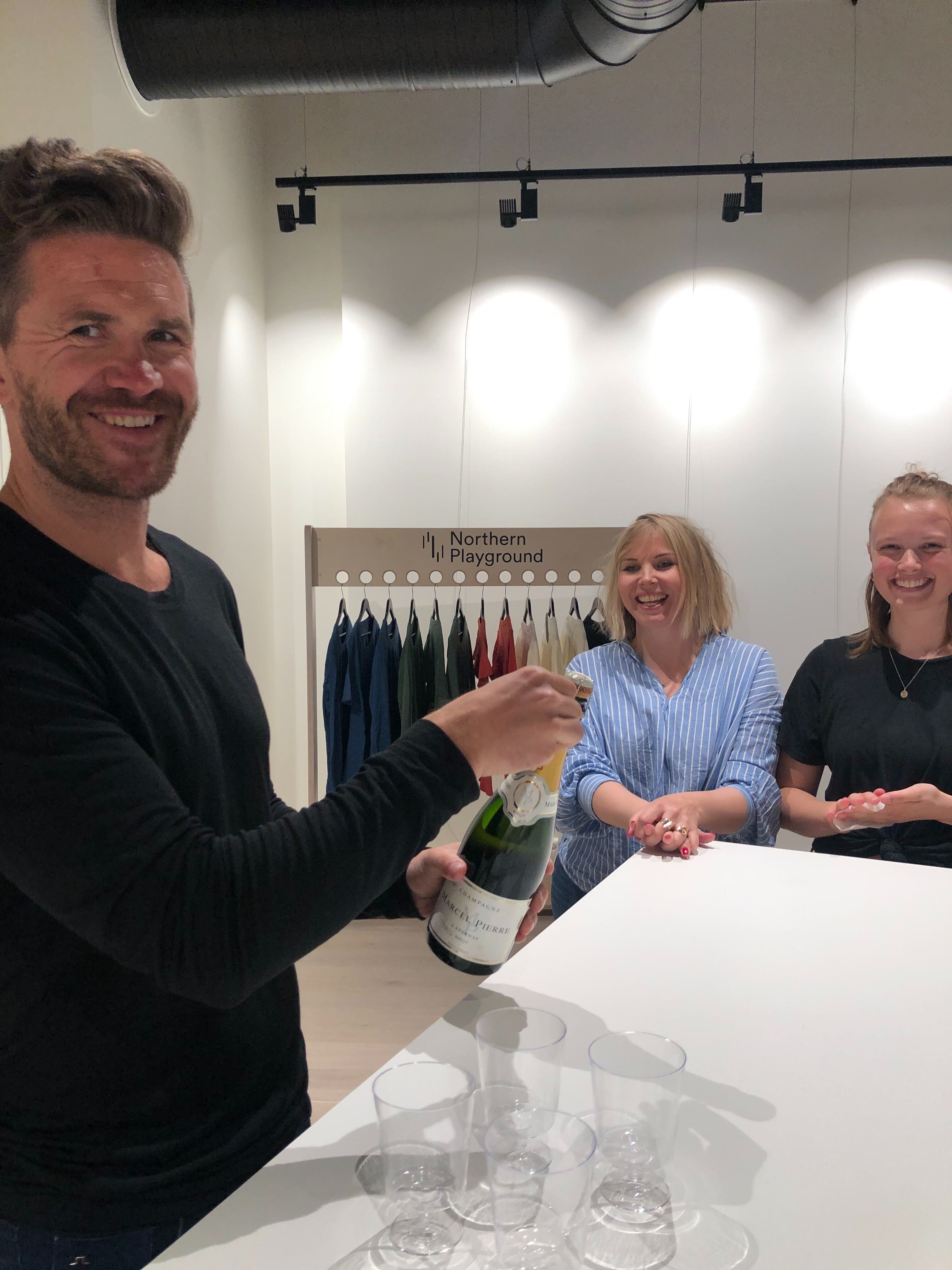 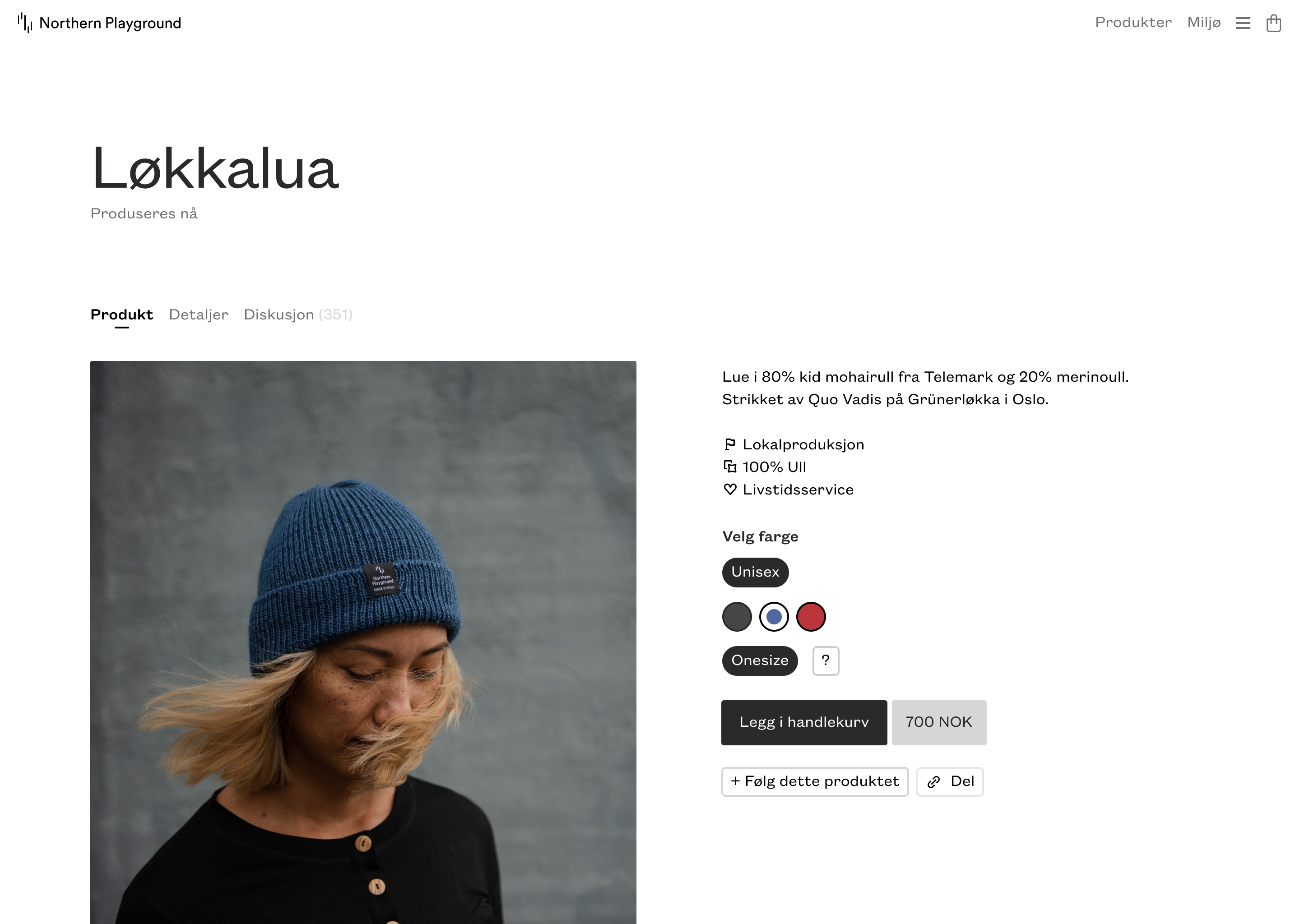 This would be the biggest project in the history of Northern Playground. A project this size involves a lot of complexity and uncertainty. From experience we knew that the best way to handle such a hefty undertaking is to do hypothesis driven experiments from the get go, and turn uncertainties into certainties. We set up one digital and one physical community-group to test our hypothesis. With a headless CMS and e-commerce platform as our foundation, we could swiftly validate or discard our hypotheses, and release one feature at a time. This gave us the possibility to iterate and optimize the design based on real customer patterns and feedback – while at the same time writing new features. This, in combination with a tight knit team, expert-knowledge from our advisor and Kickstarter founder Charles Adler, and a flexible tech-stack, made us able to have the entire interface live in just 5 months. 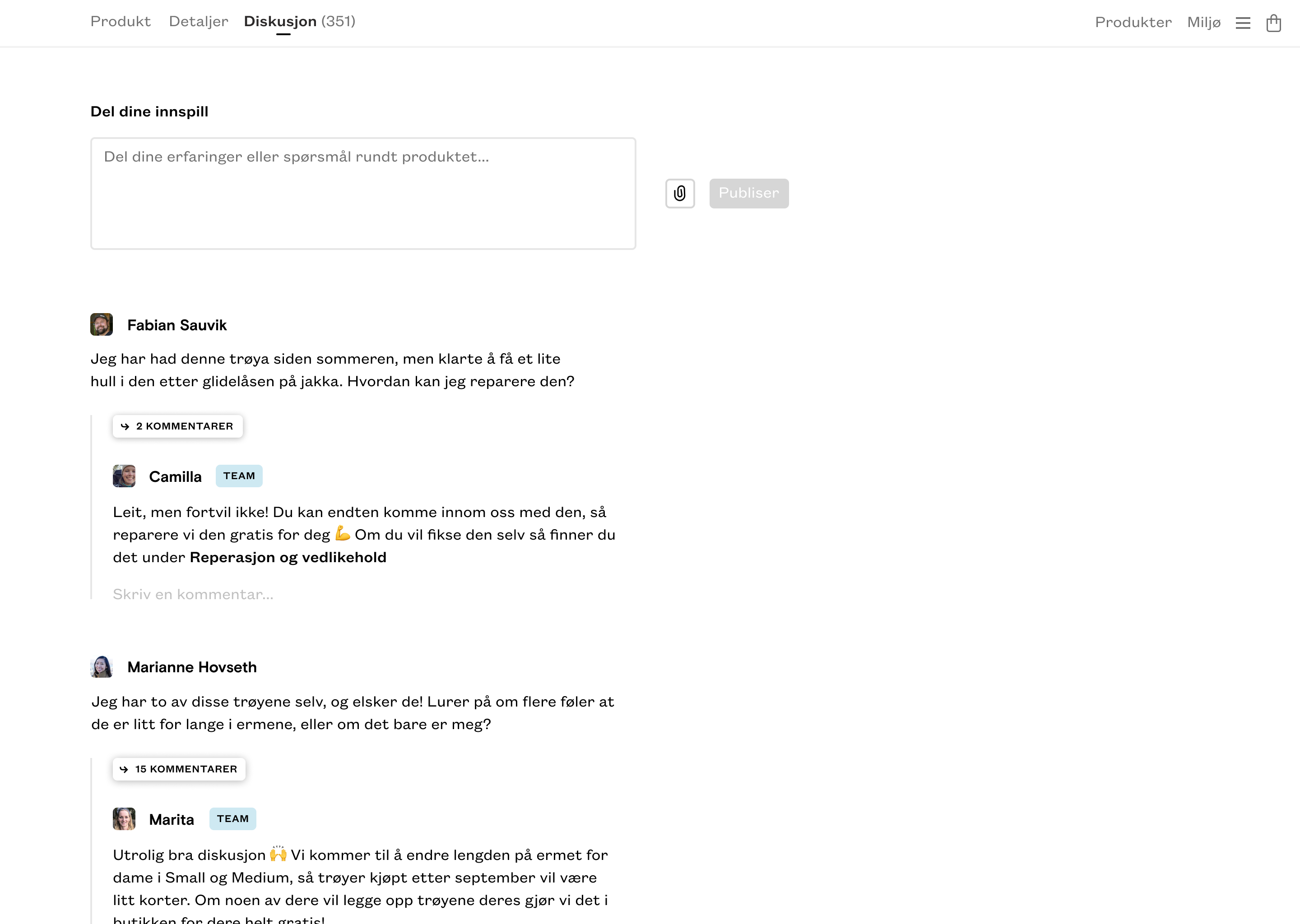 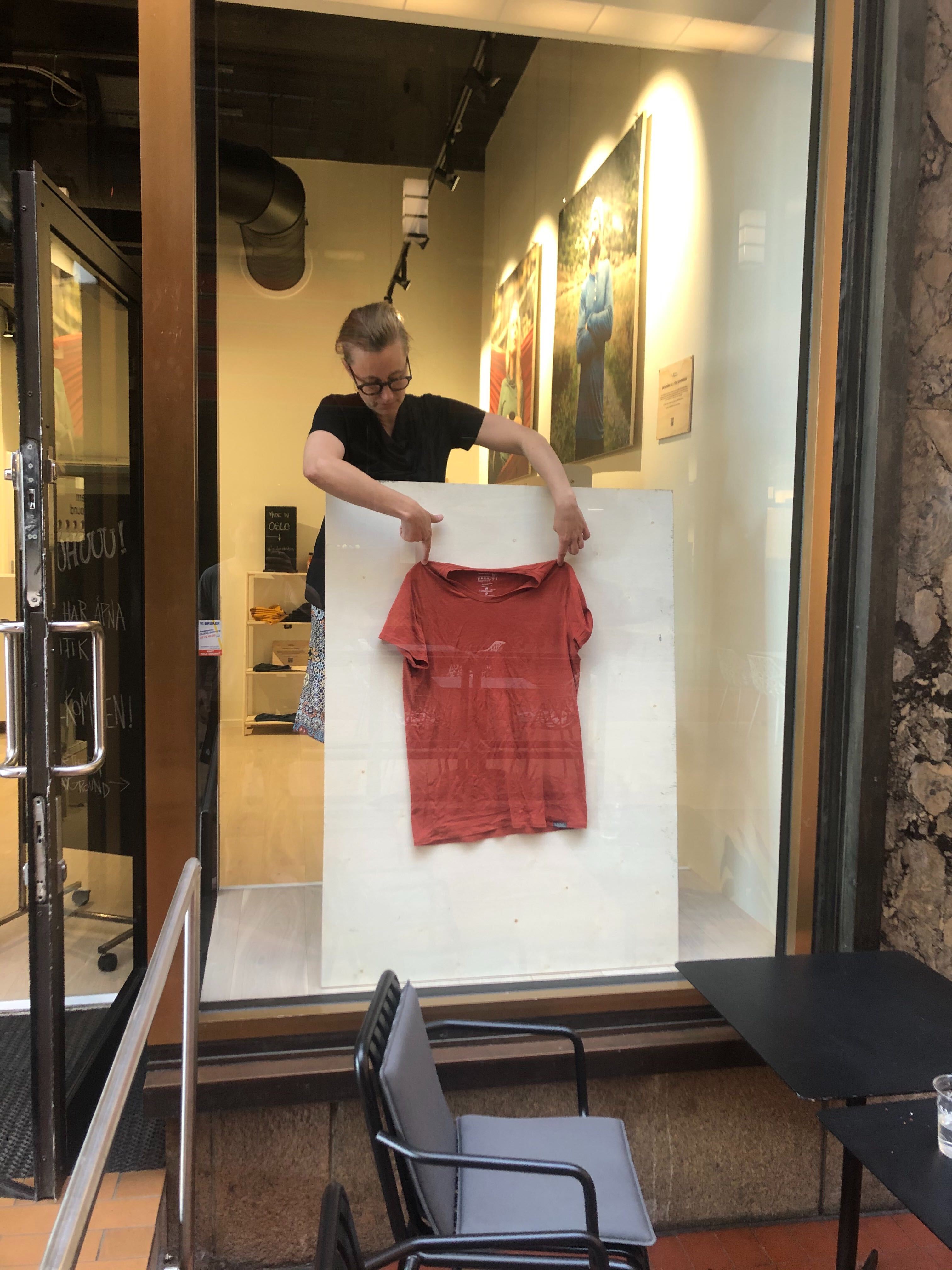 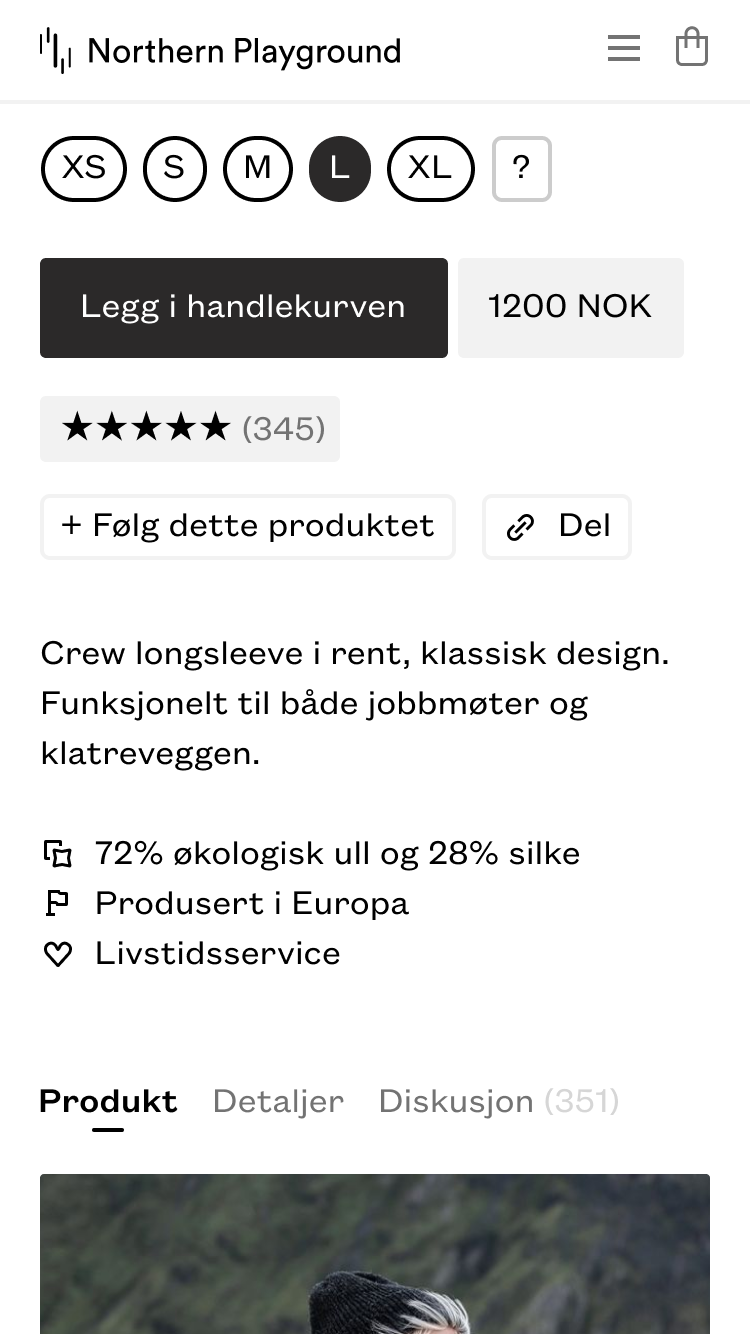 With the development of the Northern Playground being our initial e-commerce site for an external customer, the project naturally became one of many firsts. We learned how to set up Centra, integrate Adyen, handling different currencies and taxation rules, and selling products that don't exist. Yes, we had to build the webshop so that Northern Playground could pre-sell items that were currently out of stock, and sell pre-production products through reservations. We’ve also become even more conscious about the textile industries impact on the environment, our habits and the economy – and how we could challenge it.

During the project we were able to partake in the launch of their first crowdfunding campaign. Doing this through their own webshop was a big milestone for Northern Playground. The goal was 150 pre-orders for a beautiful wool and silk turtleneck. The campaign's success was as certain as turtleneck's appeal to a designer – hitting 150 reservations one week before closing. Other successes worth mentioning are: 2,3% conversion rate, 300 registered users in the community within the first two weeks of launch, 78 comments in three days on a garment in the design phase, 250 votes on the new color of a t-shirt, and pre-sales of out of stock garment every day.

With their new site Northern Playground has the most transparent and collaborative process of any clothing company we know of. Want a peek on the future of clothing? Check out their website and sign up for their carefully curated newsletter. 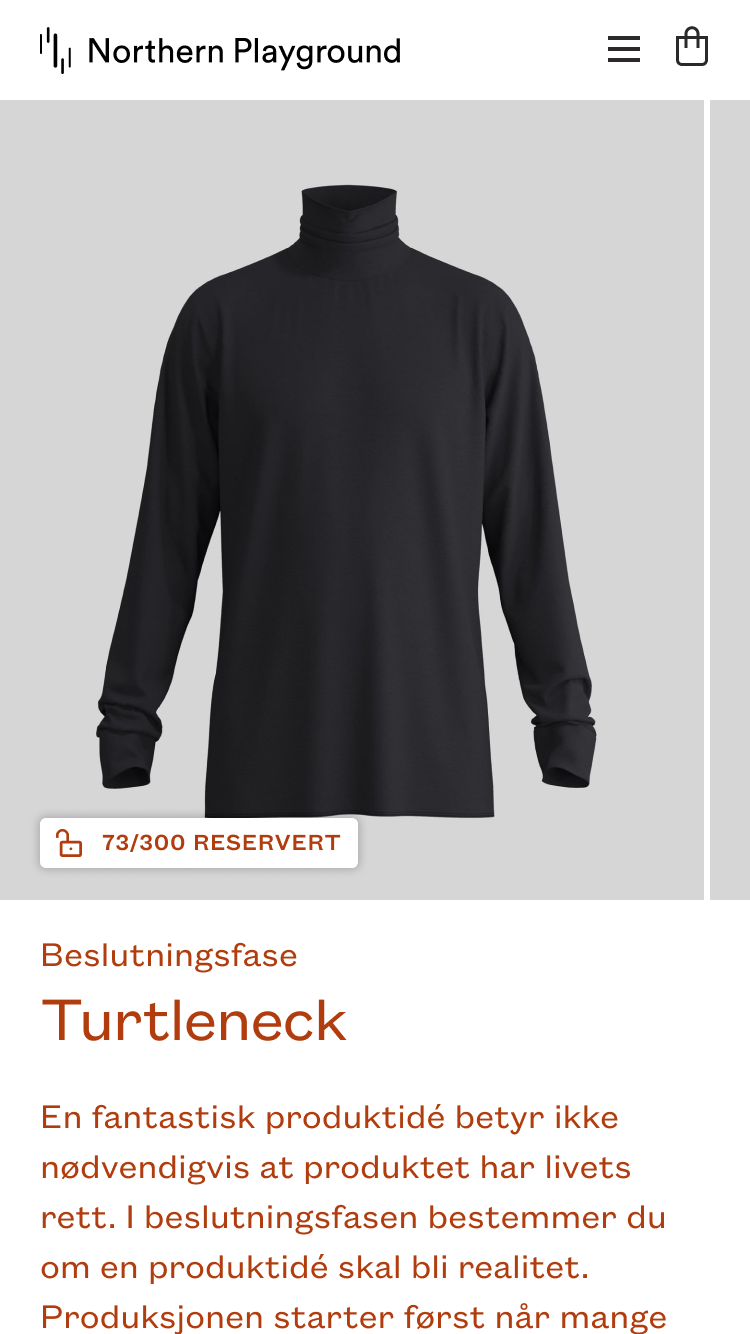 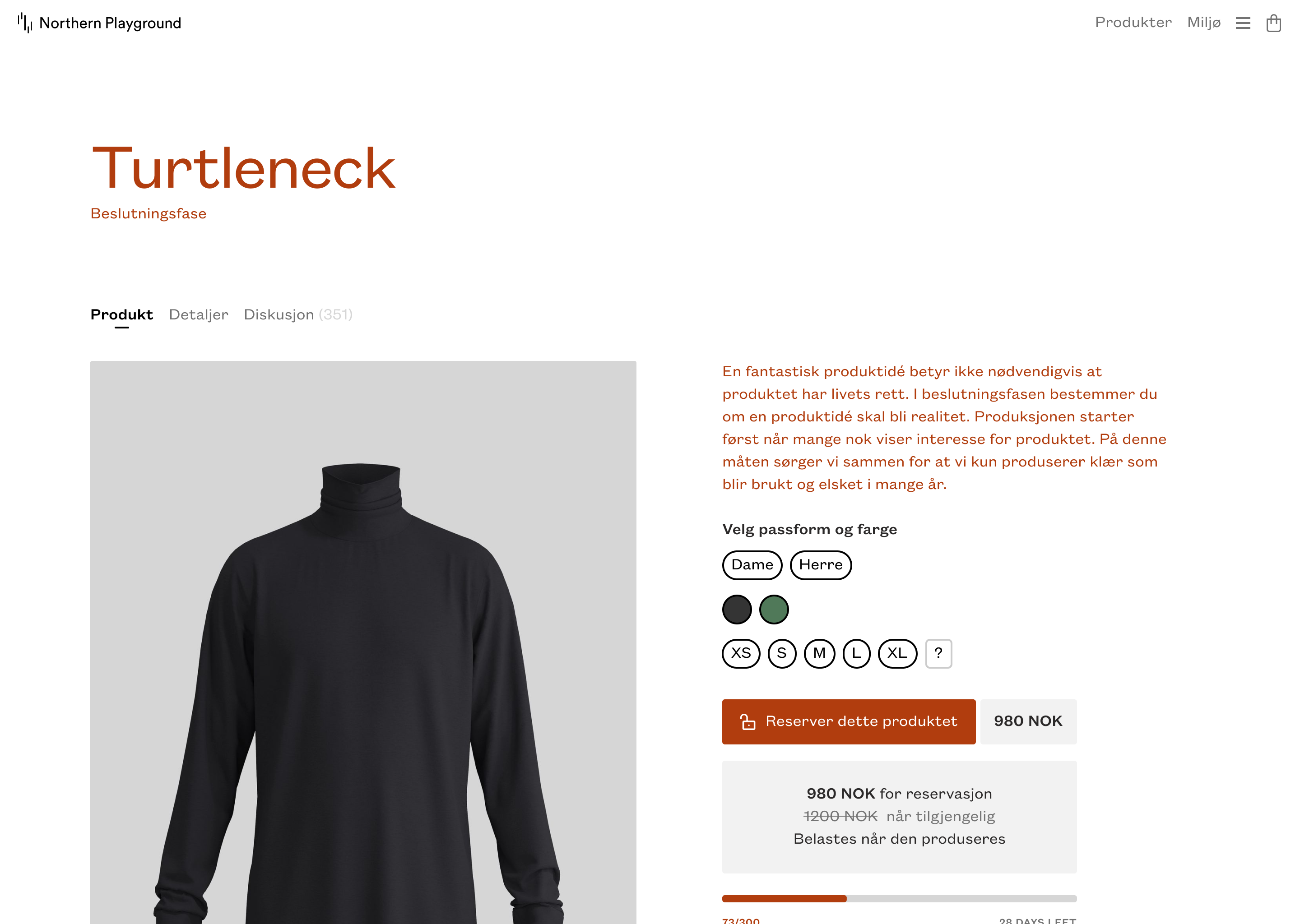 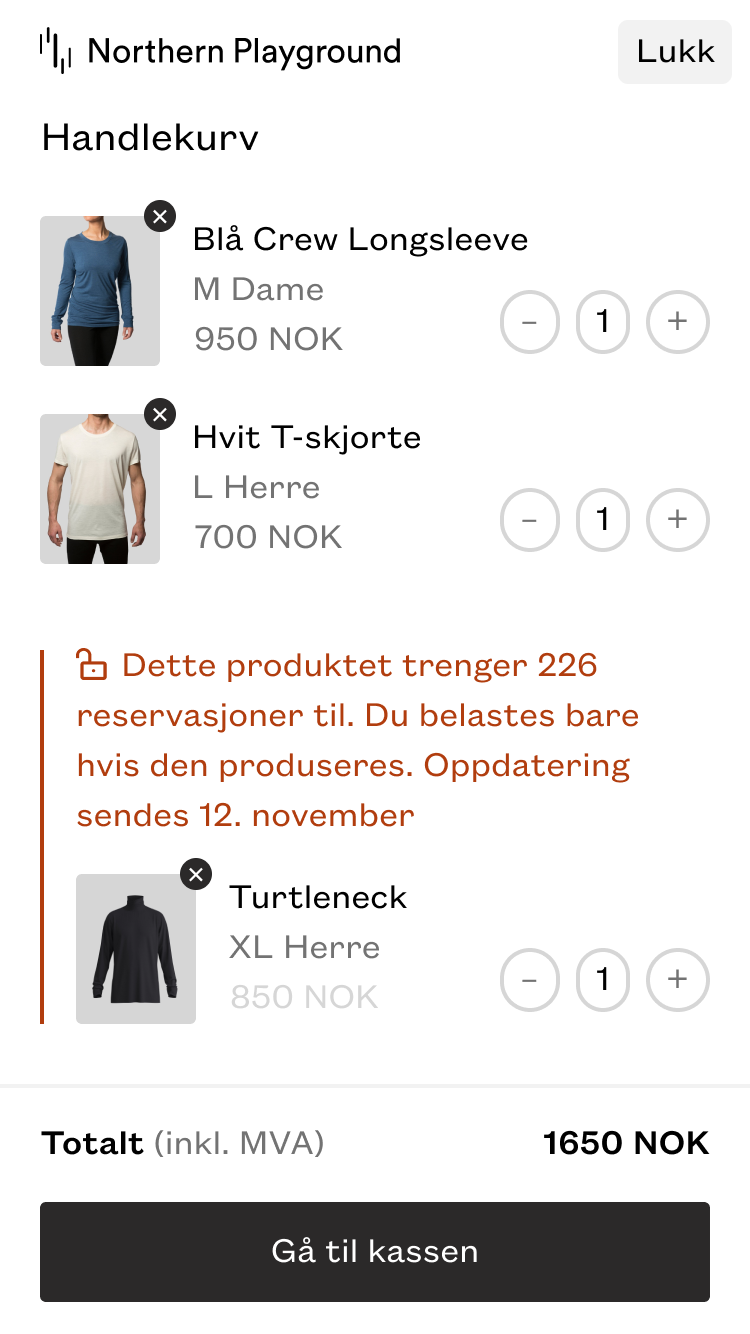 iterate ©2020
this site will always be under iteration